Spring is in the air! After seeing the same group of feeder visitors from November through February, March has brought some new birds to my feeders. On my March 2-3 count I had two Red-winged Blackbirds and two Brown-headed Cowbirds. It’s not unusual to see Red-wings around here in winter – 764 individuals were counted on the Lawrence Christmas Bird count held on December 19, 2020. In winter they often are found in large flocks mixed with other blackbirds, grackles, cowbirds, and starlings. But this was the first time this winter they, and the cowbirds, visited my feeders.

I know not everyone is excited about the return of the Common Grackle, but I love their glossy plumage and bossy attitude. This time of year we may get large flocks descending on our feeding stations which can get more than a little annoying. Taking your feeders down for a few days will encourage them to move on. Or enjoy watching the interaction of males and females as they engage in breeding-season behaviors such as males chasing after females at top speed.

A nice spring arrival that showed up on my March 9-10 count was the Eastern Towhee. This is one of the earliest migrants to arrive in our area. While it is possible to see them at any time during the winter, it’s more common to see the Spotted Towhee in winter.

And my most recent arrival – although not a feeder bird – is the Eastern Phoebe, first seen on March 16. The phoebe is an insect-eater so you know spring has arrived!

End of the season

Are the birds ignoring your finch feeder?

Get ready for Project FeederWatch!

End of the season

A summary of sparrows 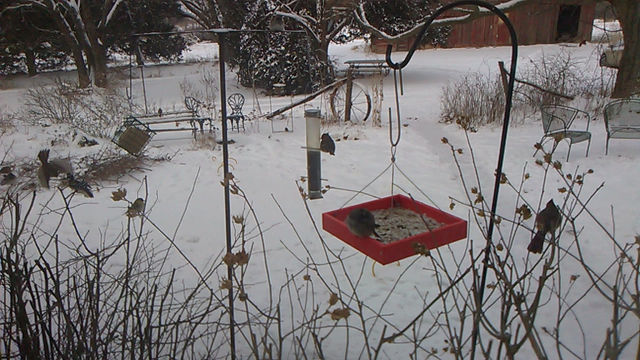 A profusion of purple